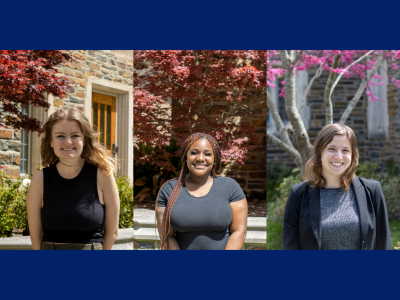 Trinity students (from left) Kerry Rork, Raia Lockerman and Anna Greenleaf participated in the 2022 ACC Meeting of the Minds Conference.

On Saturday, April 2, Raia Lockerman, Kerry Rork and Anna Greenleaf all had the same two fears: presenting their undergraduate research at a big conference and being away for the Duke vs. UNC game.

They were the three Trinity students selected to participate in the 2022 ACC Meeting of the Minds conference, hosted by the University of Virginia between April 1 and 3.

The nomination and selection process are extremely competitive, and only five students represented Duke: Lockerman, Rork and Greenleaf from Trinity, as well as David Hugo, from the Nicholas School of the Environment, and Drew Greene, from the Sanford School of Public Policy.

Lockerman, a senior majoring in Asian & Middle Eastern Studies, was the first to step up to the lectern. She presented her undergraduate thesis: “#WhenISeeThemISeeUs: Conceptualizing Black Radical Engagement with Palestine,” which explores parallels and connections between the history of American Black liberation movements and the Palestinian plight in the Middle East.

Greenleaf, a junior majoring in Psychology, followed suit that afternoon. Her research talk, "Paying It Forward: How Unequal Access to Resources Reduces Generosity," presented a social experiment in which she assessed how likely people are to perpetuate a chain of giving, such as buying a coffee for the person next in line at a coffee shop, depending on their individual means and circumstances.

“It taught me that it's a lot harder to discuss research outside of your own discipline,” Greenleaf said. “But it's also extraordinarily important.”

Rork, a senior majoring in History, closed the day with her senior thesis, "Trinity College and Empire: The Institutional and Intellectual Manifestations of Settler Colonialism at Trinity College, Dublin."

Focused on the Irish institution founded in 1592, Rork’s research looks at universities as a part of the colonial enterprise, functioning as unique subjects due to their interactions with both the region that they're colonizing and with the rest of the world.

“It was really incredible,” Rork said. “You get to be in a space and have very specific academic conversations that I wouldn't get to have in a classroom setting. There's just something special about people who are so passionate that they would fly to Virginia for a weekend just to talk about what they love. It was a really special experience.”

The professional stress was over, but a very different sort of stress was still to come when Duke’s Final Four game began that evening. Initially sad to be away from campus and their peers, the five Duke students walked into a nearby bar, resigned to watch the game by themselves. They were surprised to be welcomed by a large group of Duke law students cheering for the Blue Devils.

“It was a nice glimpse into what the Duke community is like after graduation,” said Greenleaf. “Everyone was so welcoming, and it made me less sad to be eventually leaving Duke, because there is still community outside of the campus.”

“Yes, we did lose,” said Lockerman. “But it was a great experience that I'll probably remember forever.”