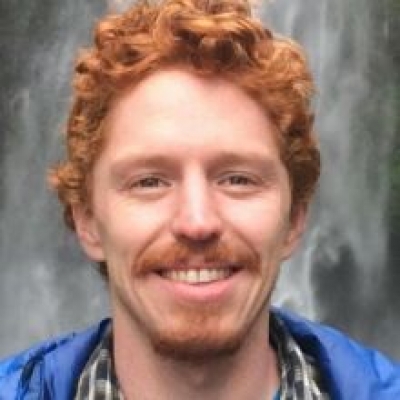 Aaron Reuben, fifth-year Ph.D. candidate in clinical psychology and member of the Moffitt and Caspi Lab, spoke at the Nicholas School’s Environmental Health and Toxicology Seminar series about the long-term implications of childhood lead exposure.

Published in the Duke Research Blog, 9/21/20: Dealing With Lead for Life by Cydney Livingston

Though lead has been widely eliminated from use in products due to proven health risks, the lifelong consequences of childhood lead exposure for children born in the era of lead use in gasoline are still unknown.

Aaron Reuben, fifth-year Ph.D. candidate in clinical psychology at Duke, spoke about the long-term implications of childhood lead exposure Friday, September 18th through the Nicholas School’s Environmental Health and Toxicology Seminar series. He conducts research as a member of the Moffitt and Caspi Lab, studying genes, environment, health, and behavior.

Reuben started with a brief history of lead exposure. After the United States’ initial use of lead in gasoline in 1923, the practice became widespread with the U.S. Public Health Services approval for expansion. Five decades later, in the mid-1970s, the Environmental Protection Agency issued the first restrictions on lead use in gasoline products. Simultaneously, surveillance of population-level blood-lead levels indicated cause for concern. Though lead was phased of out of gas completely by 1995, the peak led exposures in the 70s were on average three to four times higher than current levels that demand clinical attention. Despite lead regulations, the impacts of exposure did not miraculously cease as well. 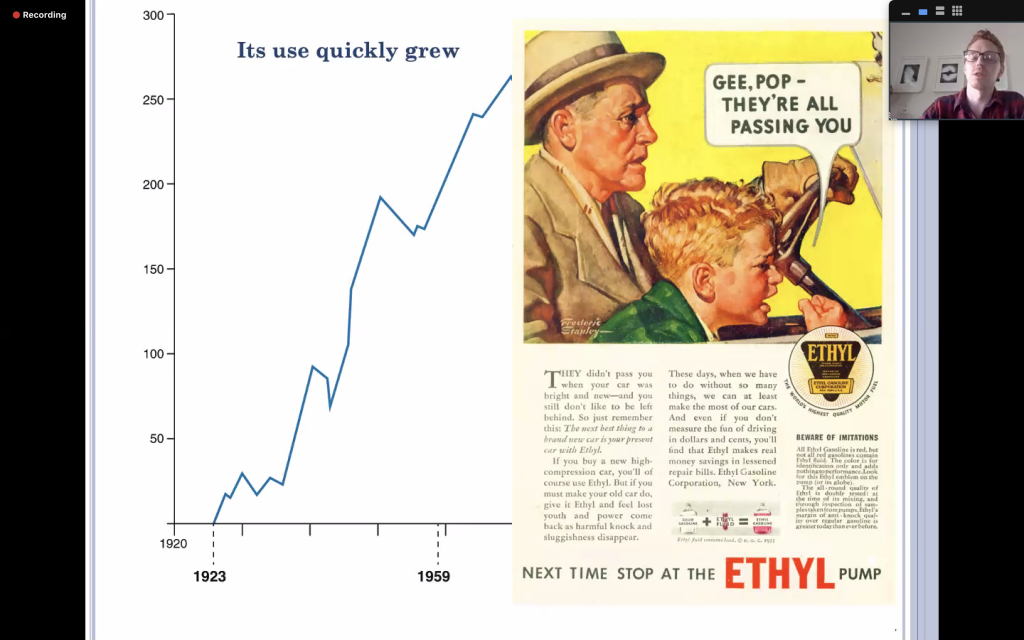 Lead use in gasoline quickly increased after its initial introduction.

The research Reuben covered in his talk centers on the Dunedin Study. This study of 1,037 people born between April 1972 and March 1973 in Dunedin, New Zealand is an ongoing longitudinal research project comprised of over 30 years of data. The cohort of participants provide a unique chance for research in which social and economic factors do not have to be detangled from findings as they represent the full range of socioeconomic statuses in their city.

Reuben’s first question was about the impact of lead exposure on psychiatric and personality differences in adulthood. Study members were asked about symptoms such as substance dependence, depression, fears and phobias, or mania. These reports were transformed into a continuous measure of general psychopathology, which indicated that children with high lead levels experienced more psychiatric problems across adulthood. Though the developmental differences were modest, the associations between lead and psychopathological issues are of a similar magnitude to other known risk factors like childhood maltreatment and family history of mental illness. Yet, unlike the latter two risk factors, Reuben said, “Lead exposure is not preordained – it’s modifiable.”

The research team also measured participant personality using the Big Five Inventory and found that individuals with high-blood level levels as children exhibited more difficult personality styles as adults. The biggest difference between groups with high and low childhood blood-lead level was the trait of conscientiousness, which has impacts on goal obtainment within one’s education and occupation, as well as overall satisfaction with relationships. 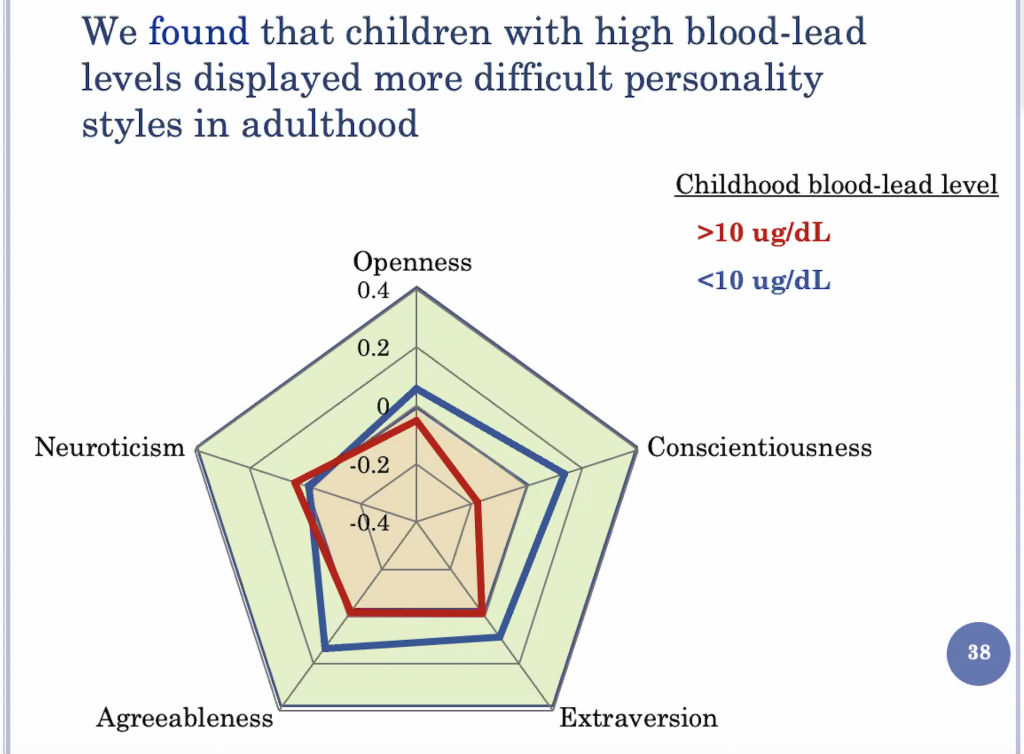 Findings from the Big Five Inventory of Dunedin participants.

The next question of the presentation centered on differences in adulthood cognitive ability. At midlife, defined as age 38 for this question, children with higher blood-lead levels had lower cognitive ability, experiencing a deficit of two IQ points per five microgram per deciliter increase of blood-lead level. Once again, though these findings were relatively modest, the loss of IQ points was accompanied by downward social mobility compared to participants’ parents. Further, when evaluations that took place at age 45 were included in the data, researchers saw even larger declines in IQ points between exposure-level groups, which Reuben predicts may even represent a trend of acceleration. He believes that as the study continues with the participants, they will find rapid decline around age 65, with higher levels of dementia symptoms among participants compared to same-aged peers. 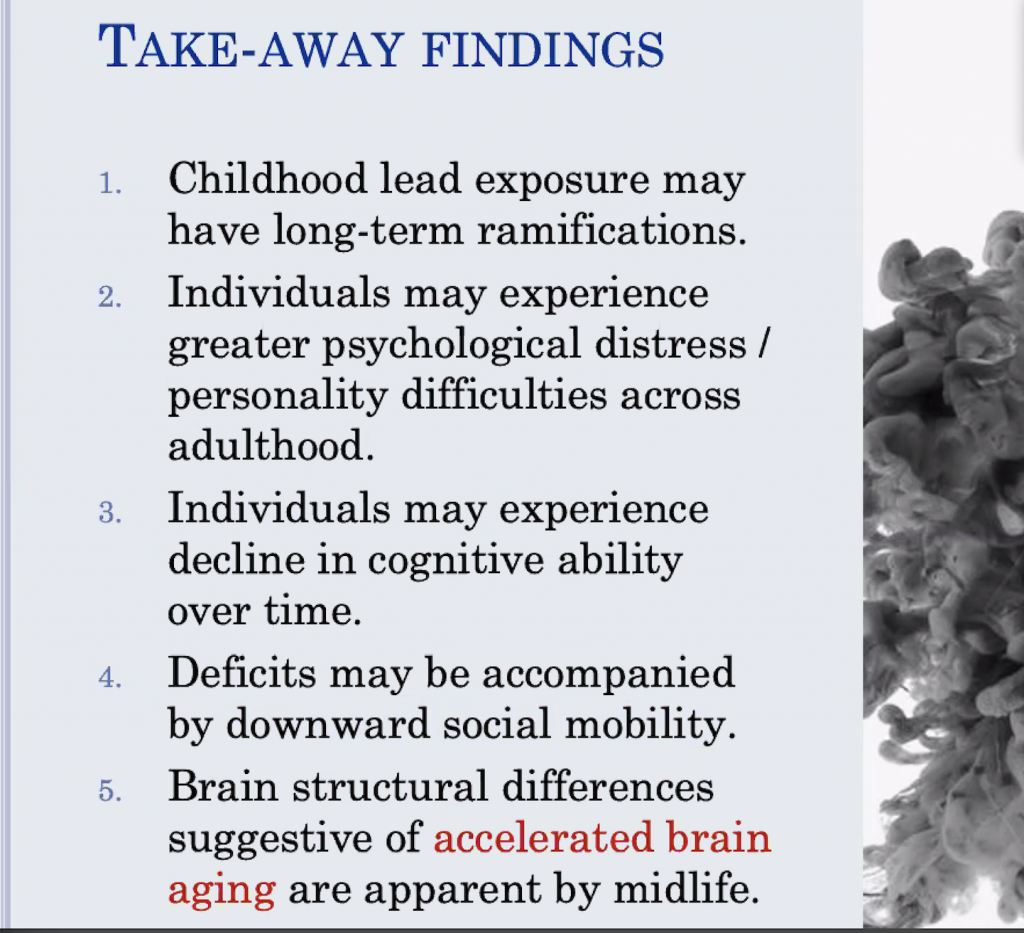 Reuben’s take-away findings from his presentation.

Reuben’s work is important for understanding how childhood exposure to this neurotoxin has the ability to influence continued development, behavior, emotion, and life outcomes decades later. It is crucial to evaluate long-term ramifications of childhood lead exposure – a phenomena experience by hundreds of millions of people across the globe during the era of lead in gasoline who are likely unknowingly dealing with impacts now.