The Duke Department of Psychology & Neuroscience hosted a retirement celebration for Professor Mark Leary on Friday, May 3 in Perkins Library. Attending the event were many colleagues and students, past and present, as well as friends and family.

Professor Rick Hoyle kicked off the celebration with introductory remarks. "Mark reaches outside traditional boundaries of discipline and subdiscipline, invariably bringing a rich, fresh and exciting perspective," Hoyle said. "He brought scientific rigor to non-traditional areas of study. He used to say that he preferred to do topics where his work would be a drop in an empty bucket and I think he blazed a lot of trails this way."

Leary has published 14 books and more than 250 scholarly articles and chapters on topics dealing with social motivation, emotion, and self-relevant thought, including The Curse of the Self: Self-awareness, Egotism, and the Quality of Human Life. He has also recorded two courses for the Teaching Company's Great Courses series: Understanding the Mysteries of Human Behavior and Why You Are Who You Are: Investigations to Human Personality.

"He’s an all-around nice guy who always has time for even the youngest, newest person at a conference," Hoyle said. "If there were more people like Mark, not only would the field be a much more pleasant and positive environment for research, it would also I think be making better progress."

The celebration included a symposium, "Self-Absorption and Its Impact on Emotion, Behavior, and Psychological Well-Being," with presentations by three of Leary's former PhD students. Kaitlin Raimi presented "Belief Superiority: The Psychology of Intellectual Arrogance," Katrina Jongman-Sereno presented "Authenticity: The Enigma of Being Oneself," and  Ashley Allen presented "Justifying the Hype around Self-Compassion."

Leary concluded the symposium with his presentation "Toward a Less Egoic World." The video of his presentation is available here. In his presentation, Leary discussed his research into the maladaptive effects of self-awareness and egoicism.  Leary described egoicism as "cognitions, motives, and emotions that are characterized by an overemphasis on I, me, and mine." Leary discussed how the same mental apparatus that permits people to self-reflect is responsible for many of the personal and social difficulties that people face as individuals and as a species. 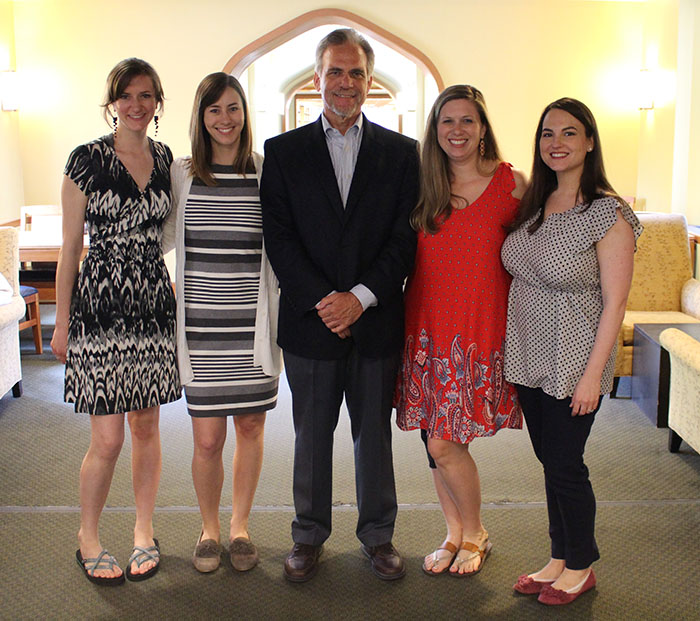 In contrast, when people are in a hypo-egoic state, phenomena such as flow, mindfulness, self-compassion, forgiveness, and gratitude often occur. This state is also associated with mystical experiences and general "peace of mind," Leary said.

In his closing remarks, Leary asked "What can be done to nudge people--and society--in a less egoic direction?"  Such a shift would include things like educational interventions, mindfulness training, as well as a general recognition that egoicism itself creates personal, interpersonal, and societal problems.

The event closed with a reception. Leary said in his retirement he plans to give more public talks and continue with ongoing collaborations. He also said he plans on living "more slowly, sanely and healthily," as well as general "old man retired stuff."