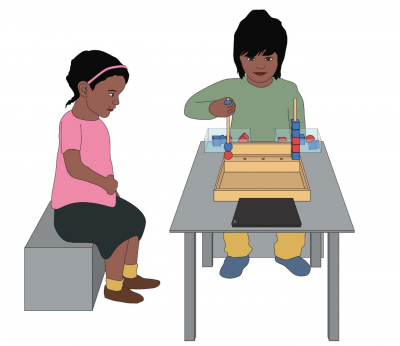 From how we say ‘hello,’ to the side of the road we drive on, all societies have conventional norms – or ‘rules’ – that shape people’s everyday lives.

A new study shows that children worldwide will challenge peers who break the ‘rules’: children not only conform, but  want others to conform too. But how they challenge rule-breakers varies between cultures.

Led by the University of Plymouth, UK and Freie Universität Berlin, Germany, the study analysed the behaviour of 376 children aged 5 to 8 eight different societies in Africa, Asia, Europe, and South America.

The observing children intervened more often when the other child appeared to play by the wrong set of rules. The study also showed that the type of intervention varied. Children from rural areas used imperative protest (e.g., just saying “No”) more than children from urban areas, who more often cited the rule or told the rule-breaker what she “ought” to be doing.

“What is new about this study is that we observed children’s behaviours worldwide,” said lead author Patricia Kanngiesser, PhD from the University of Plymouth. “To our surprise, children from rural small-scale communities protested as much or even more than children from urban settings. The next step is to explore further what motivates children to intervene and if and how they learn to do so.”

“It is easy to see why children are motivated to conform to the rules: it helps them to fit in, and they are rewarded for doing so,” said Michael Tomasello, a senior author and professor in Duke University's Department of Psychology and Neuroscience added: “It’s not nearly so easy to see why they are motivated to make others conform to the rules, even when the rule-breaking does not harm themselves or others in any way.”

The full study, “Children Across Societies Enforce Conventional Norms but in Culturally Variable Ways,”  may be viewed in Proceedings of the National Academy of Sciences. (DOI: 10.1073/pnas.2112521119)