Duke Graduate Programs Get High Marks in 2022 US News Rankings 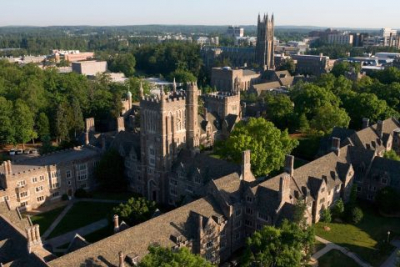 Graduate and professional programs across the university scored highly in U.S. News and World Report’s list of “2023 Best Graduate Schools.”

Duke was ranked second among Doctor of Nursing (DNP) programs, including first for the DNP Executive Leadership Specialty.

“The U.S. News rankings are an external measure of Duke School of Nursing’s leadership and contribution to nursing and nursing education,” said Vincent Guilamo-Ramos, dean of the School of Nursing, and vice chancellor for nursing affairs. “They’re a key indicator that our peers in the nursing community acknowledge the ways our students, faculty, staff, and alumni are transforming the future of health care.”

“Year after year, Duke is recognized as a national leader in patient care, discovery, and training and education,” said Dr. Mary E. Klotman, dean of the School of Medicine. “This accomplishment must be attributed to the seminal achievements of our outstanding faculty and physicians, staff, and students. At Duke, we are stronger because we share a commitment to excellence in all of our missions and a vision to transform the future of academic medicine together.”

Earlier this year, Duke University School of Medicine placed third nationally among academic medical centers in federal funding from the National Institutes of Health (NIH) in a separate ranking by the Blue Ridge Institute for Medical Research.

Here’s where the magazine ranked other graduate and professional programs at Duke:

The School of Law ranked 11th overall. Among specialty programs:

Each year, the magazine rotates the programs in the arts and sciences that it ranks. Here are the rankings for the academic departments and specialties that were ranked this year: