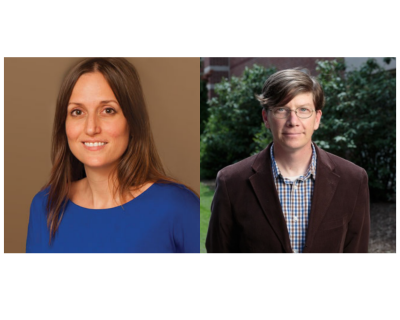 The Cattell award, which has existed for more than half a century, provides financial support of up to $40,000 for each recipient to take an extended sabbatical period to pursue new research in psychological science.

Both Cantlon and Myers were consensus top choices among the Cattell review committee, which included Duke professor of Psychology & Neuroscience Christina Williams. “I think this is a real testament to the creativity and productivity of our Duke graduates, and to their successful careers,” she said.

Cantlon, an associate professor of psychology and Zdrojkowski chair in developmental neuroscience at Carnegie Mellon University, uses fMRI and behavioral measures to compare shared and unique brain functions across species and stages of development, including preschool children, non-human primates and human adults, with the goal of understanding the structure of the human mind.

Cantlon’s Cattell project, titled “Evolutionary and Developmental Origins of Human Logic,” aims to distinguish primitive features of human cognition from those that are unique to human development.

While hierarchical reasoning is an important element of human intelligence and some researchers hypothesize that higher-order thinking is a key feature that makes humans unique, Cantlon claims that the only way to determine what separates humans from other animals is to do more studies that compare long-term trajectories of rule learning across species, cultures and stages of development.

The Cattell sabbatical will afford Cantlon the chance to develop challenging new research directions in longitudinal child development, an AI-driven laboratory for primate cognition and educational research on computational thinking.

Myers, a professor of psychology at Bucknell University, is broadly interested in animal learning and motivation, especially the psychological experiences of pleasure and reward functions in Pavlovian conditioning.

Titled “Biobehavioral Impacts of Food Insecurity in a Rodent Model,” Myers’ Cattell project will extend his ongoing research aimed at developing a rodent model of food insecurity. He has demonstrated that making rats’ access to food chronically unpredictable (while maintaining the overall amount of food over time) has lasting effects on food motivation, meal patterns, cognition and subsequent weight gain.

This novel finding suggests that chronic unpredictability has a negative impact on behavior and regulation for humans who cope with food insecurity.

The sabbatical will provide Myers a year at the University of Southern California to collaborate with the Kanoski Lab.

“As my research expertise is primarily behavioral, I've selected this sabbatical site to benefit from of Dr. Kanoski's complementary expertise on the neurobiology of food reward, particularly regarding hippocampal and brainstem circuits that integrate signals for energy homesostasis with learning adaptive responses to the food environment,” Myers wrote in his project proposal.