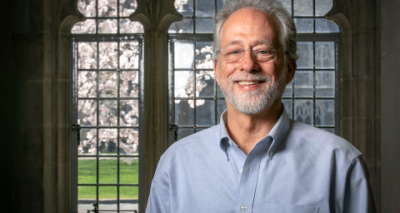 Michael Tomasello, the James F. Bonk Distinguished Professor of Psychology and Neuroscience, has been awarded the David E. Rumelhart Prize, one of the most important prizes in cognitive psychology.

The Cognitive Science Society award honors a team or individual who makes a “significant contemporary contribution to the theoretical foundations of human cognition.” Established in 2001, it includes a monetary award of $100,000 and is funded by the Robert J. Glushko and Pamela Samuelson Foundation.

Tomasello, who received his undergraduate education at Duke, returned to his alma mater as a professor in 2016.

He studies what makes humans unique. In particular, he is known for research comparing development in humans and in primates.

“Through his comparative work with children and primates, he has shown how the capabilities of even 3-year-old humans go beyond those of more mature chimps and other non-human great apes in significant ways,” said Rick Cooper, a professor of cognitive science at Birbeck, University of London, who chairs the awards selection committee.

In works such as his recent book, “Becoming Human: A Theory of Ontogeny,” Tomasello argues that social cognition sets humans apart.

“It’s not just that humans are generally smarter, it’s that we have a special kind of smarts,” Tomasello said in a 2019 interview with Duke Today. “We are able to plug into the knowledge and skills of other people and to take their perspective, by collaborating, communication and learning from them in unique ways.”

Tomasello previously served as co-director of the Max Planck Institute for Evolutionary Anthropology in Leipzig, Germany, and is a fellow of the National Academy of Sciences and of the American Academy of Arts & Sciences.

Elizabeth Marsh, who chairs Duke’s Department of Psychology & Neuroscience, noted that the award is the latest of many Tomasello has received.

“This award specifically recognizes a scientist’s theoretical contributions – his big story that not only explains existing empirical data but also allows testable predictions,” Marsh said. “Mike Tomasello’s work examines the similarities and differences in ape and human cognition to help us understand why humans are different, in a way that informs research in psychology, neuroscience, anthropology and linguistics.”

The award was presented July 27 at the annual conference of the Cognitive Science Society.