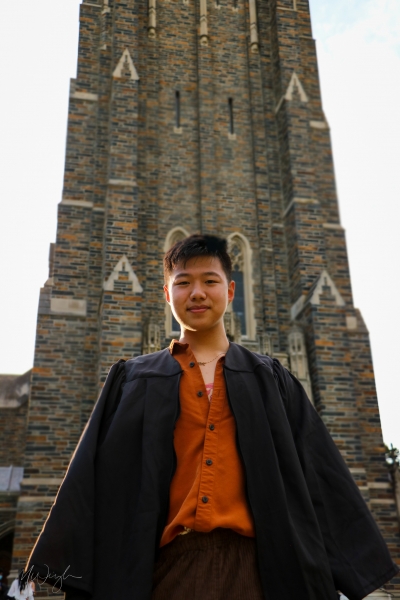 Congratulations to Michael Xie, winner of the 2021 Karl E. Zener Award. This award is given annually to an undergraduate psychology major at Duke University who has shown outstanding performance and scholarship, as determined on the basis of both the honors thesis (evaluated by a committee of faculty members) and the total academic record. As part of Michael’s study, Interpersonal, Intrapersonal, and Contextual Predictors of Straight Men’s Negative Evaluations of Gay Men, Michael hypothesized that straight men would judge a feminine voice more harshly than a masculine voice, prefer straight targets over gay targets, and the fragile masculinity of straight men would predict these negative reactions.

Michael started this project after his sophomore year. He participated in the Summer Vertical Integration Program (VIP), where he worked with Dr. Sarah Gaither and Adam Stanaland as his faculty and graduate student mentors. Adam was already looking at masculinity threat research, so it worked out to go into that line of research. “1 in 6 Gen Z individuals’ identify as something other than heterosexual, so we know that interactions between gay and straight men will become more common. Surveys have found that American attitudes towards gay people are improving, and straight men increasingly support more gay rights. However, we also see between the years of 2017 and 19 that LGBT hate crimes are on the rise, and most disproportionally target gay men, of which the attackers are usually straight men,” Michael said. After exploring the available research and data, Michael wanted to focus on straight men specifically and what factors predict negative reactions of gay men, through how they perceive voices of others in order to explore ways to mitigate the risk of violence against the queer community.

Michael explained that this was a three-year project in the making. “We have done three studies in total and one pre-test of the voices that we used. We created novel vocal stimuli for these studies, in which a male actor read instructions in a masculine and feminine voice, participants would hear a voice reading instructions, and participants had to enter confirmation codes to confirm that they were listening. In some iterations we told participants whether the voice belonged to a gay or straight man, or we let them perceive it however they wanted,” Michael said.

Michael’s hypothesis was proven to be true in the results. “In terms of what we did find, we found that how masculine voices are perceived by straight men is more important in determining how much a target man is liked than just his sexual orientation alone," Michael said. Michael also found an additive relationship in masculine norms. “If the target was feminine and gay, they were the least liked, whereas being masculine and/or straight boosted liking,” Michael said. Michael explained that most exciting about what he found is that fragile masculinity motivates negative reactions. “Fragile masculinity is how much pressure straight men feel from social context to conform to masculine norms. Straight men will sometimes conform to these norms because they want people to like them and respect them. Men who feel high external pressure are more likely to negatively evaluate and aggress towards gay men,” Michael said.

During his time at Duke, Michael continued working in Dr. Gaither’s lab for three years. He was in Defining Movement (DefMo), a multicultural dance group on campus where he served as President last year. Michael volunteered at the hospital before the COVID-19 pandemic, and then volunteered at the vaccination clinics during the pandemic. Michael also volunteered for Root Causes, an organization that addresses food insecurity in Durham area, where he delivered fresh produce to families in need around the Durham area. Michael is taking a gap year after graduation before matriculating into medical school, and will be spending the year working as a Clinical Assistant at a dermatology clinic in Connecticut.