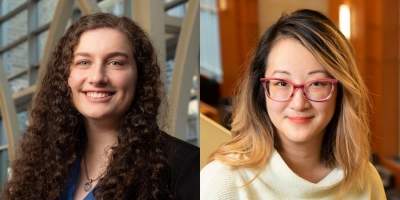 Intelligent. Clever. Bright. Smart. Odds are many Duke students have heard those words applied to them. Yet, what happens when you take thousands of smart people and throw them onto one campus where social comparison and feelings of imposter syndrome run rampant?

“I think I am intelligent, however, I often question if I am smart enough to be at Duke.”

“I believe myself to be intelligent, but only in certain disciplines…”

“… I prefer to highlight my work ethic and curiosity, because I think those traits are more important than raw intelligence.”

These quotes from Duke undergraduate students were part of a February exhibit on the student wall in Perkins Library. On the surface, the exhibit consisted of framed art with student quotes about intelligence. However, it was also a window into the research of two Ph.D. candidates in psychology and neuroscience, Brenda Yang and Christina Bejjani, who have spent the last two years discovering and analyzing students’ perceptions of intelligence.

Yang and Bejjani, both of whom received Dean's Awards for Excellence in Mentoring this year, collected thousands of responses by surveying Duke undergraduates in Associate Professor Bridgette Martin Hard’s Intro to Psychology course, as well as classes in computer science, chemistry, math, and physics. They then worked with Hard and a team of research assistants to take this information about students’ mindsets and create an online Mindset Map. Through this site, anyone can explore their own mindset by answering questions about intelligence in both a free-response and survey format.

While many students consider themselves smart, they often wrestle with doubt when surrounded by similarly intelligent peers. In contrast, others may maintain confidence in their level of intellect and see this “competition” as a chance to grow. According to Yang and Bejjani, students’ mindsets are reflected in the words that they choose to answer questions about intelligence.

When it comes to how someone thinks about intelligence, their perception can be categorized as a fixed or growth mindset. Fixed mindsets believe that everyone has a set level of intelligence at birth, while growth mindsets are based on the idea that anyone can expand their intelligence through new experiences, seeking challenges, and acting on their own curiosity.

“Your belief about intelligence can really shape your life dramatically, especially in school but also in other areas,” Yang said. “We want everyone to have that moment where they realize ‘Oh, I’m not alone. Everyone feels like this.’ ”

American psychologist Carol Dweck has sold more than a million copies of her book Mindset: The New Psychology of Success, in which she pioneered the idea of a growth mindset. Through their work with Hard, Yang and Bejjani are diving deeper into how students’ mindsets about intelligence can be determined through the words that they use.

“Personally, I’d say my goal was to make students feel seen, to promote their voices in an academic space, and show the commonalities in how and what students responded to our prompts about intelligence,” Bejjani said. “It felt like a way of giving psychology back to the people who fuel it.”

If you didn’t get a chance to check out their exhibit, visit the researchers’ Mindset Map (mindsetmapper.org) to explore your own beliefs about intelligence.