How your sense of self affects the choices you make: Sarah Gaither awarded NSF CAREER grant to study how considering multiple identities can lead to flexible thinking 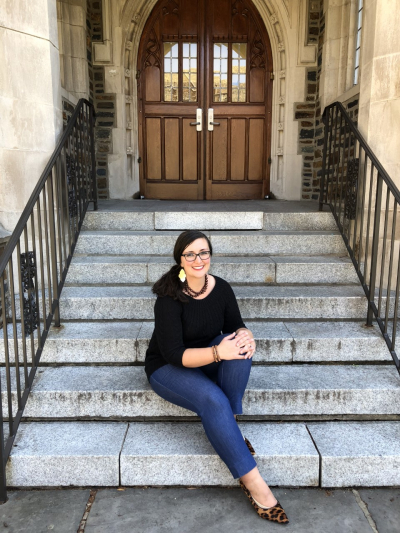 In her nearly six years as an assistant professor of Psychology & Neuroscience at Duke, Sarah Gaither has become an influential voice in diversity scholarship.

While prioritizing teaching and undergraduate research in her Duke Identity & Diversity Lab, Gaither has also published articles in mainstream news outlets like CNN, Today and Vox, appeared on National Public Radio’s The State of Things and Code Switch and received a career award from the Society for Personality and Social Psychology.

The highly competitive grant is awarded to early-career faculty who serve as academic role models in research and education and who lead advances in their department and university.

Beginning in January, Gaither will use the award to launch a series of studies examining pathways that can produce a “multiple identity mindset,” or what Gaither refers to as “identity accessibility.” This relatively new concept in the field of psychology refers to a way of thinking deliberately about one’s multiple identities as a means of enhancing a flexible view of the world.

“It’s very difficult for people to process more than one identity at one time because it isn’t how we are taught to think about ourselves,” Gaither explains.

She proposes that there are two ways one can arrive at a multiple identity mindset. The first is lived experience, such as being biracial or bicultural. The topic has long been an area of examination for Gaither, a biracial person who presents as white. This lived experience led Gaither to develop an astute awareness of how skin tone can determine how people are treated and was influential in her decision to study social psychology.

Gaither’s early research delved into that experience and focused on people who are biracial or who have multiple cultural identities, finding that they possess greater identity flexibility than those from monoracial backgrounds.

“It really highlights the malleability of biracial individuals and the fact that they might have an extra tool to help navigate different types of spaces,” she explains. “My work studying biracial and bicultural people and groups shows that these populations have more naturally existing multiple identities, and that they are more used to thinking about themselves from multiple perspectives.”

The second path to a multiple identity mindset is experiencing contact with others whose identities differ from one's own, for example via travel or an upbringing that encouraged meaningful contact with people different from oneself. Gaither finds that such contact also expands one’s worldview, helping people see more commonalities with social outgroup members. In other words, anyone, regardless of their racial background, has the ability to think flexibly about themselves.

The NSF CAREER grant is an extension of Gaither’s previous research on randomly assigned college roommates, which found that living with an other-race roommate significantly increased the diversity of students’ friend networks and led to greater flexibility in how students think about group membership.

Gaither argues that as the U.S. population becomes more multiracial and multi-ethnic, it is increasingly important to understand and maximize the benefits of perceiving oneself as having multiple identities. Her research also suggests that reminding ourselves of our multiple identities can temporarily boost creativity and problem-solving abilities in both adults and children.

“In our society, we have a default way of thinking about ourselves as one thing at a time,” Gaither explains. “There is a lot of research that’s shown that as a species we are not well-equipped to multitask, and that in order for us to process our lives better we put things into smaller categories, which means we’re overlooking the fact that we’re not just one thing at one time. It’s not just one part of you that’s causing you to be a friend, or an enemy, to someone — it’s all the parts of yourself coming together in one moment.”

The NSF CAREER funding will do more than study those processes, though. It will also support them directly by providing training opportunities for the next generation of Duke’s diversity scholars: researchers who emphasize working with and studying underrepresented groups.

“A big motivation for securing this grant was to ensure that I had funding for the next five years,” Gaither said. “This way I can offer paid opportunities for limited-income, underrepresented students in my lab. I want them to have a really good experience — not only to run studies, but to present research at conferences and come to see themselves as scientists and as scholars, on top of being a Duke student — and through that experience be able to access their own multiple identities.”

Gaither will also use the grant to develop programming for local science museums that teaches children how to become more flexible thinkers, implement university-level assessments that can inform campus diversity efforts and bring diversity science scholars as speakers for the Psychology & Neuroscience department.