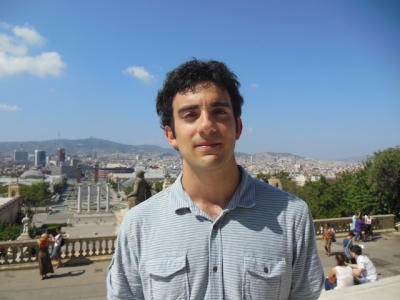 A boy is born in a hospital in the former Soviet Republic of Armenia in the early 1990s. His birth comes in the middle of the Soviet Union's collapse. The hospital he is born in has no running water, heat, or electricity. Shortly thereafter, the boy and his parents flee to the United States, desperate for a fresh start. The boy grew up cognizant of being an immigrant and the baggage that comes with that identity. He also harbored an appreciation for the opportunities living in America provided, opportunities others surely wanted but were not lucky enough to have. Luckily for P&N, this boy, Andrei Amatuni, grew up to love coding and brains, which eventually earned him a position in the Bergelson Lab here at Duke.

Andrei attended the University of Rochester. Initially, he planned to major in economics and political science; he was fascinated by people's choices and behaviors. But Andrei wanted to dig deeper, wondering where those inherited values originated from. This led him to cognitive science, focusing on the computational information processing within the brain that leads to peoples' decisions. Before graduating, the then 22-year-old Andrei left school for awhile to create his own business (a high-frequency currency trading firm) to help support his family, but returned to finish his degree.

How many years of service do you have at Duke?

I have been here for a little over a year.

What is your affiliation with the Psychology and Neuroscience Department?

I write code for the Bergelson Lab. We're an infant language acquisition lab. I write most of the scripts that process the audio and visual data collected from the research on children as they develop, as well as other necessary programming things around the department.

What is your favorite memory with this department?

I spend a lot of time working on code, so I really enjoy the meetings and talks, where I can hear and learn about other people's research. My favorite talk was from a vision-science researcher from MIT. She does work with computational models of visual information processing.

Of all the things you learned in your time here, what's one of the most significant takeaways?

I really appreciate learning how to organize and balance my time between tasks. Time management is an ongoing process.

Do you have any hobbies?

I like to read (who doesn't?), as well as make music. I play guitar but also make music electronically with computer programming.

What others are saying about him:

"Andrei has been an amazing asset to everyone in our lab; it's no exaggeration to say that if he hadn't come along to join our group when he did, we couldn't have achieved what we did with our longitudinal dataset. More than that, Andrei's the rare person with amazing programming skills but also a deep curiosity about cognitive science underlying human learning and thinking. So beyond his help with scripts and workflows, he's also made several intellectual contributions to our group, taking some of our work in directions we would not have gone otherwise. We'll certainly be sad when he goes off to start his PhD, though also proud and thankful for his contributions!" -Dr. Elika Bergelson, P&N Assistant Professor

"Andrei has made some significant contributions towards the redesign of P&N's Departmental Participant Pool (DPP) database. The database has been used for subject recruitment by Duke's Child Studies Group (https://psychandneuro.duke.edu/childstudies)  and is currently  being expanded to include all ages across the lifespan, as other P&N labs start to recruit subjects. Andrei has just finished creating a functional prototype that we will use as we push through to the final version" -Matt Mielke, P&N IT Manager

Andrei will be attending graduate school sometime in the near future.